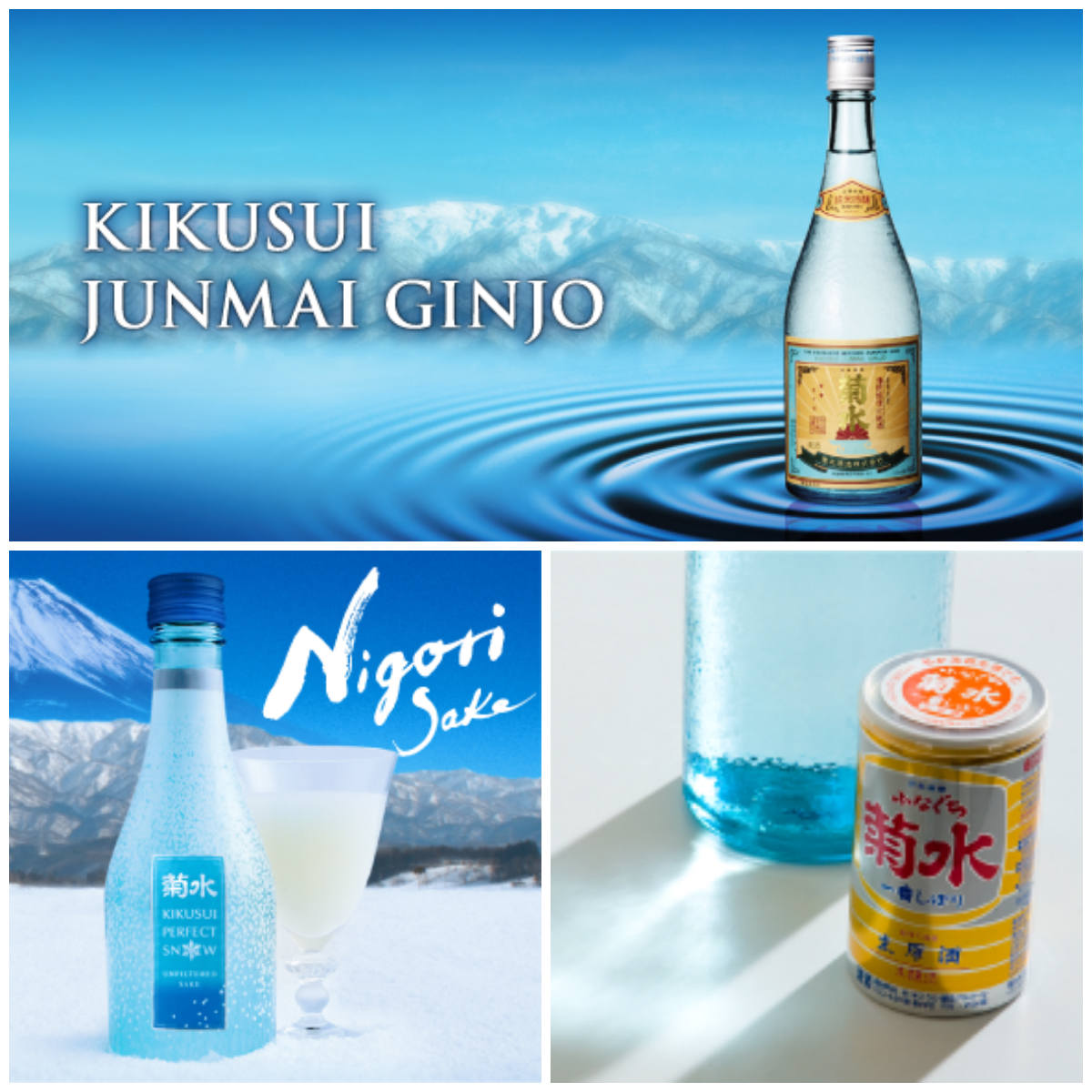 “Oooooh, look at the pretty blue bottle!” This is a phrase we hear often at the shop. For those of you who aren’t familiar with the “pretty blue bottle”, it refers to Kikusui Junmai Ginjo, a very  tasty sake that hails from Niigata prefecture.

While we all know that you shouldn’t shop for sake based solely on the prettiness of the bottle, in this case you’d be fine. That’s because Kikusui makes some darn good sake, and we’ll be sampling a bunch of it this weekend.
Join us this Saturday for our Kikusui Sake Tasting here at the shop. We’ll be sampling five different sake, all from Kikusui, including a high octane Nigori sake with an alcohol level of 21%! You won’t want to miss the chance to also try a very special Kikusui Junmai Daiginjo that is made with a special rice that was once nearly extinct.

And for good measure, we’ll be hosting some representatives from Kikusui Sake Brewery at this tasting. They’ll be on hand to pour their delicious sake and answer any of your questions. Should be an awesome event with something for everyone. Hope to see you there!
Kikusui Sake Tasting!
Saturday, June 6, 2015
5:00pm to 8:00pm

The “pretty blue bottle”. This is a light and comfortably dry premium sake with the aroma of fresh cantaloupe and banana followed by medium body bringing refreshing Mandarin orange like overtones. With just the right amount of body and a comfortable dryness it enhances any dish you eat. This is a great white wine alternative that is perfect for sake lovers and beginners alike.

This Junmai Daiginjo represents the pinnacle of the brewer’s art, with rice milled down to 40% of its original size then fermented slowly at low temperatures. This sake has a rich aroma and gentle crisp dryness. This is the only sake in the world made with the legendary Kikusui sake rice. This rice, thought to be extinct, is the father of the most popular brewing rice in Japan, Gohyakumangoku. Be sure to try this sake for a true taste of Japanese sake history!

This full-bodied sweet Nigori genshu is not just a regular Nigori sake. It’s an undiluted (genshu) so it has an alcohol content of 21% and chewable grains of rice from our traditional brewing methods. Perfect Snow also provides for more versatile drinking possibilities than your normal Nigori sake, as you can drink it chilled, on the rocks, with soda or mixed with your favorite juice. For easy mixers or fun cocktails Perfect Snow is the perfect partner.

The sake in a can. Funaguchi has a rich, full-bodied flavor but with a refreshing clean finish. Because this sake is unpasteurized this fresh fruity flavor matures day-by-day in the can. In six months it transforms into a rich brandy-like flavor. After one year it comes to resemble a Chinese rice wine. Also being undiluted (genshu) this sake has an alcohol content of 19% instead of the usual 15%, opening it up to the possibility of interesting cocktails. Experience the difference of unpasteurized, undiluted sake.

This sake starts off the same as the yellow can above, but is then purposely aged at low temperatures for one year before being released for sale. Being a Nama sake the enzymes are still active and over the course of a year they allow Aged Funaguchi to acquire a heavier mouthier feel and rich, generous character.

So please join us this Saturday for our Kikusui Sake Tasting, and sample a variety of different sake for your tasting pleasure. See you then!

Founded in 1881 by the Takasawa family, Kikusui Sake Brewery is located in Shibata City in Niigata prefecture, which is known for it’s high quality rice and snowy winters.

Kikusui is still run by the same family under the current 5th generation President. Over the years Kikusui has endured many trials including securing rice for brewing, labor shortages and drops in sales in the harsh post-war years.

The biggest challenges came in the form of the Niigata Earthquake in 1964 then the Kaetsu Flood of 1966 and 1967, where for two consecutive years the brewery was destroyed and washed away.

The name “Kikusui” is the combination of two words “Kiku” (?) which means chrysanthemum, and “Sui” (?) which means water. The name originates from a Noh play called “Kikujido” which was based on the 13 volumes of “Taiheiki” a chronicle of medieval Japan.

In one of its verses, it tells the story of a hermit who had been banished to to live in the mountains. For 700 years he had been transcribing parts of a sutra onto a chrysanthemum leaf so that he would not forget it.

The story goes that by drinking the dew that formed on the leaf of the chrysanthemum he was able to live for as long as he did. The name “Kikusui” was derived from the belief that the water, “SUI” from the chrysanthemum “KIKU” brought eternal youth. 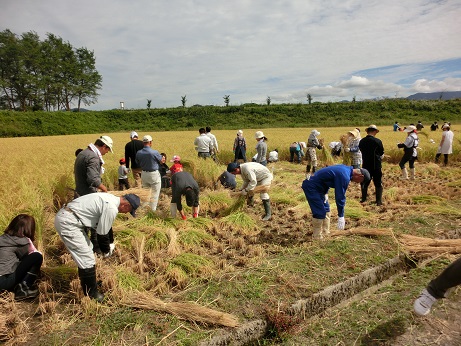 Kikusui Sake Rice Being Harvested
Sakamai Kikusui Junmai Daiginjo is made from a very special sake rice called “Kikusui”. This rice was originally developed back in 1937

Kikusui rice was created through the selected breeding of the famous Omachi rice variety. The result was the “perfect” sake rice with a quality equal to if not better than Omachi rice. 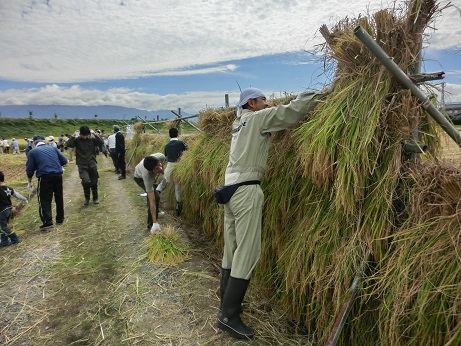 Kikusui Sake Rice Being Harvested
However, a few years after it’s development, Kikusui was replaced by another related breed of rice called “Shiragiku”. After that, Kikusui rice all but disappeared for the next half century. 50 years later a decision was made to try and revive this all but extinct sake rice.

A mere 25 grains of Kikusui rice was found, and an attempt to propagate Kikusui once again was begun. Thankfully they were successful in bringing back this wonderful sake rice. You can taste it’s flavor in Sakamai Kikusui Junmai Daiginjo which we will be sampling this Saturday at the shop. 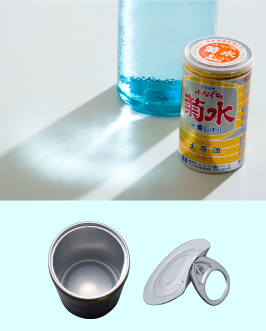 If Can, Can …
So what’s with the aluminum can you ask, and why in the world would anyone put sake in a can instead of a bottle? All very good questions that deserve a very good answer.

Funaguchi Kikusui Ichiban Shibori is an unpasteurized and undiluted sake. This means that unlike most standard sake, it still contains live enzymes and all sorts of microbial goodies.

Light, heat and the air can all damage sake, and is especially bad for unpasteurized sake. Kikusui’s solution to protecting their delicate namazake was to put it in an aluminum can.

By using a can they were able to completely block out the light, and then by filling the can with 200ml of sake instead of the usual 180ml they were able to reduce the amount of air that would come into contact with the sake.

All of these things were done to protect this delicate type of sake, which in turn allows more people to enjoy the flavor of pure sake (nama) previously only available to those lucky enough to visit the brewery.