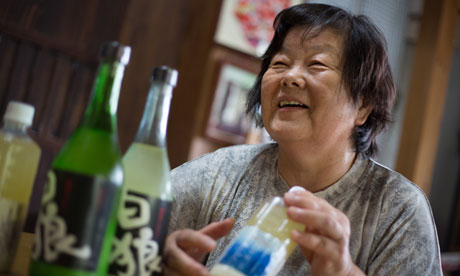 By Justin McCurry / The Guardian

Chieko Sasaki with her own brand of sake alcohol, which she makes as a nuclear evacuee. Photograph: Jeremy Sutton-Hibbert

It’s little wonder that Chieko Sasaki is gripping two bottles of sake like her life depends on it.

For weeks after the meltdown at Fukushima Daiichi nuclear power plant last March, Sasaki believed her brewing business had met the same fate as her hometown, Iitate.

The farming village lies just outside the 20km (12-mile) evacuation zone surrounding the plant, but was evacuated two months after the accident after independent monitors discovered dangerously high levels of radiation there …