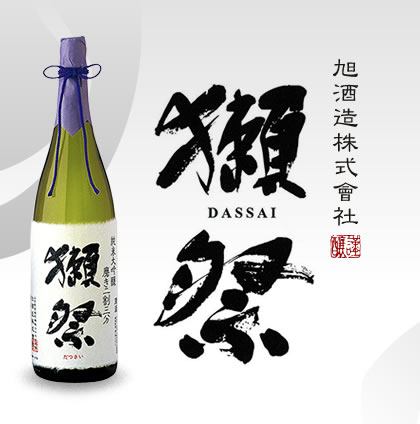 I’ve been waiting a long time for this tasting … over TWO YEARS to be exact.  Cue the choir singing and shine the bright lights on my face … next Friday night (05/18) we are having our FIRST DASSAI SAKE TASTING!

For those of you who don’t already know this, Dassai 50 was the sake that really got me (Malcolm) into drinking sake before we opened the shop.  I remember having my first sip and being bewildered by the floral aroma and fruity flavors, wondering how sake could taste so darn good?  The fact that Dassai 50 is so reasonably priced for a Junmai Daiginjo didn’t hurt as well.  It soon became my everyday favorite sake and continues to be my “go to” sake today.

Next FRIDAY we have the special treat of sampling FIVEdifferent sake from Dassai, including their super high end Dassai 23 and a brand new Dassai Sparkling Sake that has just been introduced to Hawaii.  We also have the pleasure of hosting Dassai Representative, Ms. Yumi Ohira, who will be here from Japan to pour her sake for us and answer our questions.

Ms. Ohira was nice enough to accommodate our request of having her pour for us, but to do so we needed to schedule this tasting for a Friday instead of Saturday. This is why we’re sending out our email notice today instead of our usual Monday.  We hope everyone will still be able to make this tasting and join us for what should be a very fun and exciting evening.

Here is the lineup for next FRIDAY.

Malcolm’s favorite and the one that got him started, this Junmai Daiginjo begins with lively floral aromas and well rounded flavors of fruit and candy.  Delicate and elegant yet flavorful and aromatic.

Light and balanced with soft fruity flavors and a mild acidity.  For when you want something smooth and drinkable that is not too precocious.  The “39” in it’s name means the rice was milled down to 39% of it’s original size.

Using Yamada Nishiki rice that has been milled down to a ridiculously tiny 23% of it’s original size, this ultimate sake has a delicate fruity aroma and a refined flavor profile.  Beyond smooth, this is the one sake you need to try.

Unlike most other Nigori Sake, this one’s not overly sweet and has a lighter rice sediment than most.  It has a nice full flavor but still drinks remarkably smooth and ends with a refreshing semi dry finish.

Brand new to Hawaii, this sparkling sake is also a nigori sake but with a very light rice sediment.  Soft aromas of anise turn to mild flavors of coconut and pineapple and then finishes with a refreshing “effervescence”.

Asahi Shuzo, is located deep in the moutains of Yamaguchi prefecture, the most southern prefecture of the main Japanese island of Honshu.

Otter Festival
The name “Dassai” translates to “Otter Festival”.  Part of this comes from the ancient name for the area of Yamaguchi prefecture where the brewery is located.

In the old days, many otters could be found in the nearby rivers and streams of this area.  The otters would often lay out the fish they caught on the shores of the river, just like they do at Japanese festivals. This led to the reference “otter festival” but there is also more.

A famous haiku poet named Masoka Shiki who lived over a century ago referred to himself as “Dassai” because of his propensity to scatter his reading material all over the floor of his room in the same manner that the otters would spread out their fish.

Mr. Shiki was instrumental in creating a revolution in Japanese literature during his time, and Asahi Shuzo shares a similar philosophy with him. Rather than become complacent with existing traditions and techniques, they also wish to reform and revolutionize how sake is made in order to produce a superior product.

Preparing Rice
When crafting their sake, Asahi Shuzo has always tried to incorporate the new along side the traditional.  Some of their brewing methods make use of ancient tools and are done by hand, while others take advantage of extremely modern technology.

Dassai Centrifuge Machine
They’ve been the “first” in many areas including the first to use a centrifuge to “press” their sake as opposed to using a more traditional “fune” or large pressing machine.

Asahi Shuzo is also one of the first breweries to be able to brew sake year round, which allows them to put out a more consistent product.

Another unique distinction of Dassai sake is their recent certification as a kosher sake.  This certification was not easy to achieve, and took over a year to finish.

Everything from their rice and yeast to all of the machines that they use were scrutinized and validated.  Asahi Shuzo is the first sake brewery to have every sake they make be certified as kosher.

Dassai 23 Rice
It once held the record of having the smallest milled rice and we’ll be sampling it this Friday.  Super premium Dassai 23 is truly the sake that defines Dassai.

The “23” means the rice was milled down to 23% of it’s original size before brewing.  This means 77% of the rice was polished off leaving a small itty bitty rice kernel.

Pure starch produces a cleaner more elegant flavor while fats and proteins tend to produce more off flavors.  As you can imagine, this sake is not cheap, but well worth it’s price when you consider the cost involved in producing it.

Parking
Metered parking available on King Street, Kaheka Street & Liona Street.  Pay lot located behind our building. $2 for 1/2 hour Monday – Friday until 6pm and Saturdays until 2pm.  All other hours $2 for 5 hours (paybox).  Enter from Liona Street.  Unfortunately we are unable to  validate parking.